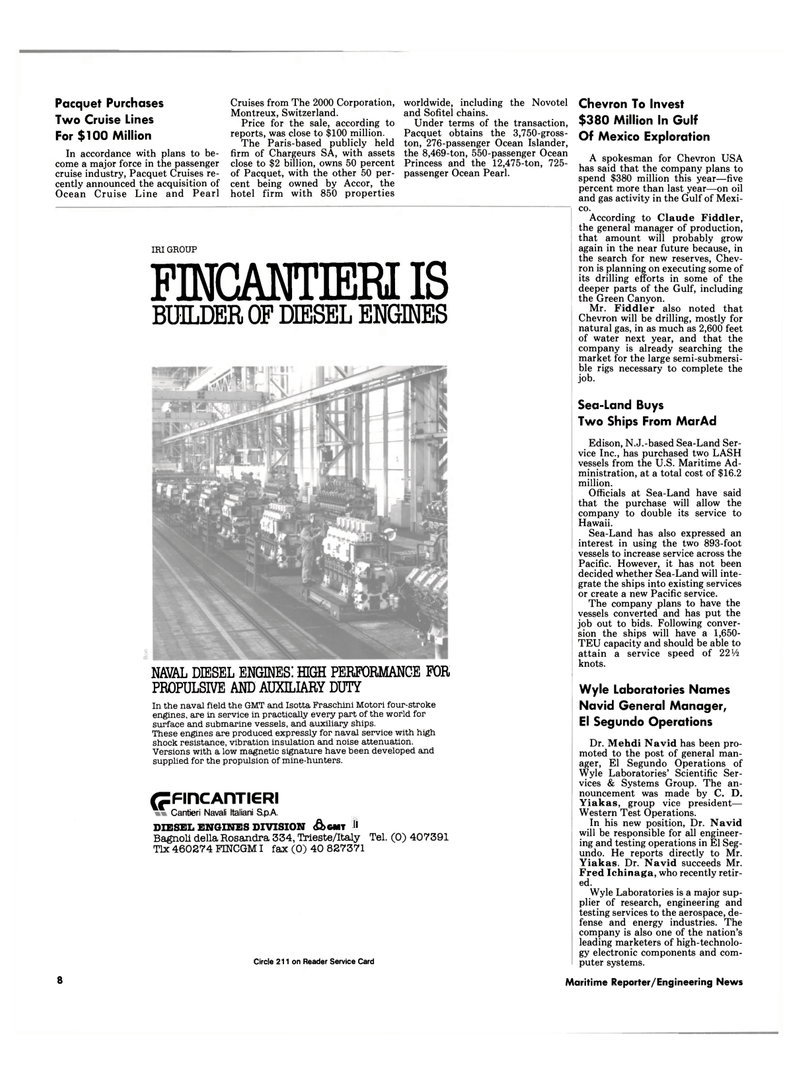 In accordance with plans to be- come a major force in the passenger cruise industry, Pacquet Cruises re- cently announced the acquisition of

Cruises from The 2000 Corporation,

Price for the sale, according to reports, was close to $100 million.

The Paris-based publicly held firm of Chargeurs SA, with assets close to $2 billion, owns 50 percent of Pacquet, with the other 50 per- cent being owned by Accor, the hotel firm with 850 properties worldwide, including the Novotel and Sofitel chains.

In the naval field the GMT and Isotta Fraschini Motori four-stroke engines, are in service in practically every part of the world for surface and submarine vessels, and auxiliary ships.

Versions with a low magnetic signature have been developed and supplied for the propulsion of mine-hunters. (pFinCAnTIGRI

Chevron To Invest $380 Million In Gulf

A spokesman for Chevron USA has said that the company plans to spend $380 million this year—five percent more than last year—on oil and gas activity in the Gulf of Mexi- co.

According to Claude Fiddler, the general manager of production, that amount will probably grow again in the near future because, in the search for new reserves, Chev- ron is planning on executing some of its drilling efforts in some of the deeper parts of the Gulf, including the Green Canyon.

Chevron will be drilling, mostly for natural gas, in as much as 2,600 feet of water next year, and that the company is already searching the market for the large semi-submersi- ble rigs necessary to complete the job.

Pacific. However, it has not been decided whether Sea-Land will inte- grate the ships into existing services or create a new Pacific service.

The company plans to have the vessels converted and has put the job out to bids. Following conver- sion the ships will have a 1,650-

TEU capacity and should be able to attain a service speed of 22 Vi knots.

Dr. Mehdi Navid has been pro- moted to the post of general man- ager, El Segundo Operations of

Wyle Laboratories' Scientific Ser- vices & Systems Group. The an- nouncement was made by C. D.

In his new position, Dr. Navid will be responsible for all engineer- ing and testing operations in El Seg- undo. He reports directly to Mr.

Wyle Laboratories is a major sup- plier of research, engineering and testing services to the aerospace, de- fense and energy industries. The company is also one of the nation's leading marketers of high-technolo- gy electronic components and com- puter systems. 8 Maritime Reporter/Engineering News