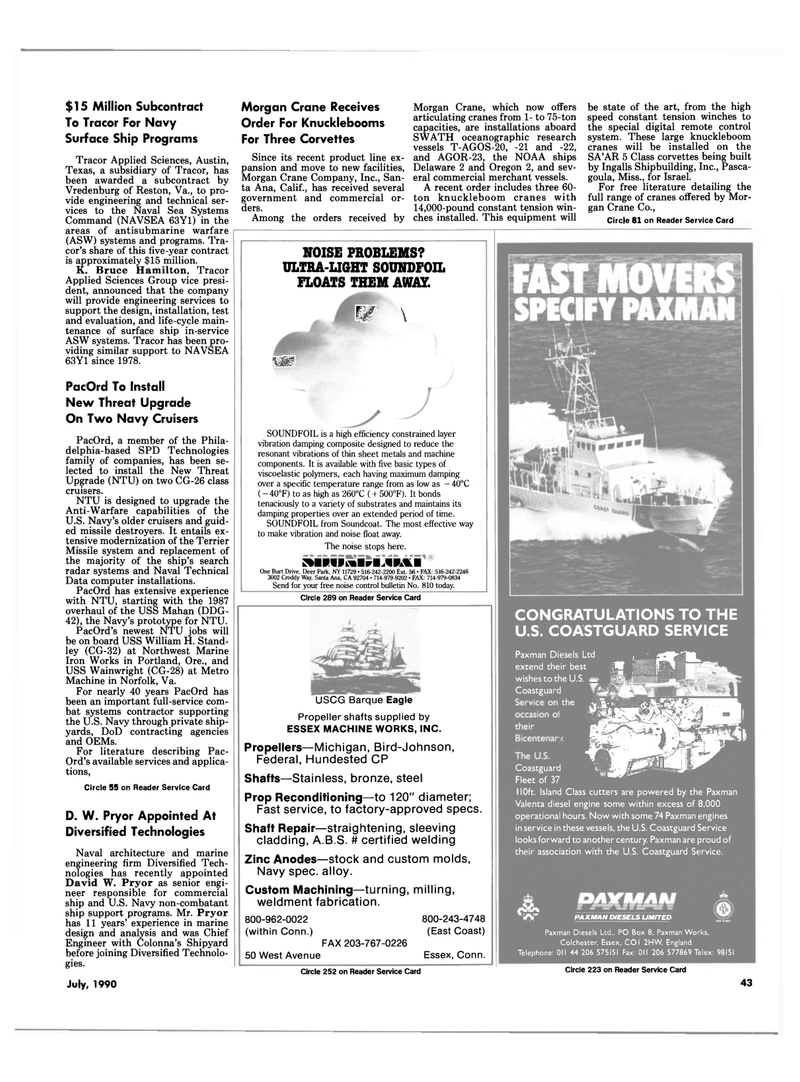 To Tracor For Navy

Texas, a subsidiary of Tracor, has been awarded a subcontract by

Command (NAVSEA 63Y1) in the areas of antisubmarine warfare (ASW) systems and programs. Tra- cor's share of this five-year contract is approximately $15 million.

ASW systems. Tracor has been pro- viding similar support to NAVSEA 63Y1 since 1978.

PacOrd, a member of the Phila- delphia-based SPD Technologies family of companies, has been se- lected to install the New Threat

NTU is designed to upgrade the

PacOrd has extensive experience with NTU, starting with the 1987 overhaul of the USS Mahan (DDG- 42), the Navy's prototype for NTU.

Iron Works in Portland, Ore., and

Since its recent product line ex- pansion and move to new facilities,

Among the orders received by

Morgan Crane, which now offers articulating cranes from 1- to 75-ton capacities, are installations aboard

FLOATS THEM AWAY. f \ mm

SOUNDFOIL is a high efficiency constrained layer vibration damping composite designed to reduce the resonant vibrations of thin sheet metals and machine components. It is available with five basic types of viscoelastic polymers, each having maximum damping over a specific temperature range from as low as - 40°C (- 40°F) to as high as 260°C (+ 500°F). It bonds tenaciously to a variety of substrates and maintains its damping properties over an extended period of time.

SOUNDFOIL from Soundcoat. The most effective way to make vibration and noise float away.

Send for your free noise control bulletin No. 810 today.

Fleet of 37 llOft. Island Class cutters are powered by the Paxman