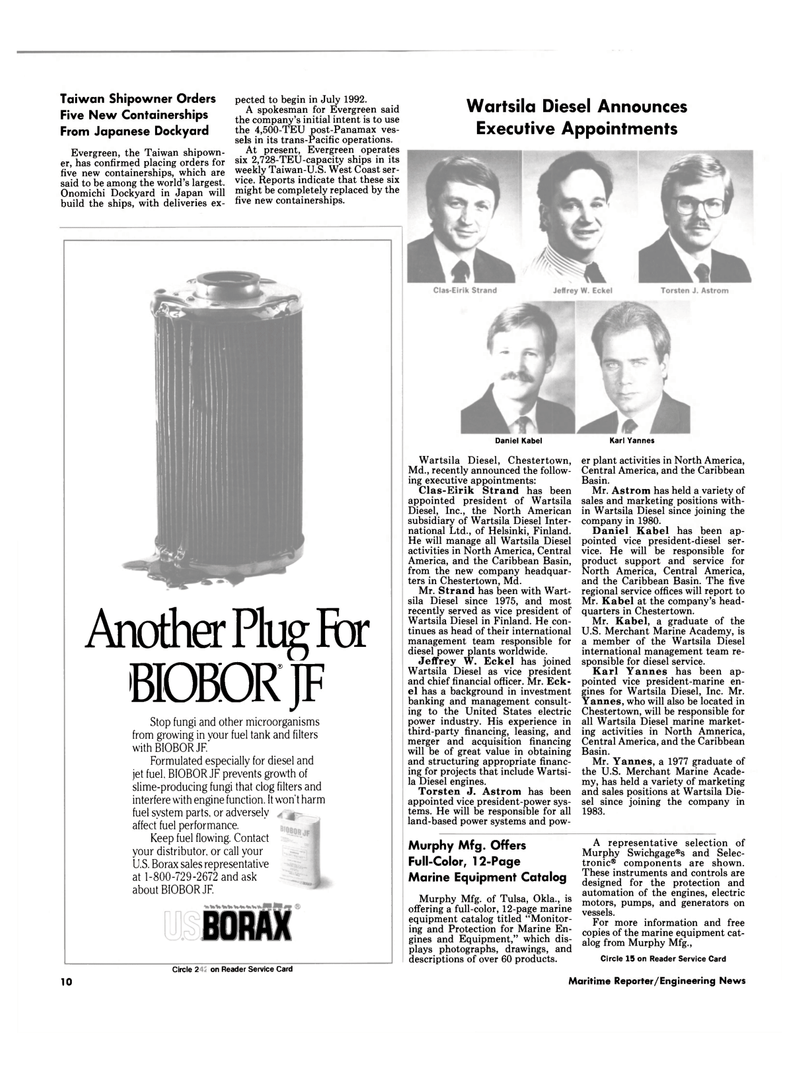 Evergreen, the Taiwan shipown- er, has confirmed placing orders for five new containerships, which are said to be among the world's largest.

Onomichi Dockyard in Japan will build the ships, with deliveries ex- pected to begin in July 1992.

A spokesman for Evergreen said the company's initial intent is to use the 4,500-TEU post-Panamax ves- sels in its trans-Pacific operations.

At present, Evergreen operates six 2,728-TEU-capacity ships in its weekly Taiwan-U.S. West Coast ser- vice. Reports indicate that these six might be completely replaced by the five new containerships.

Stop fungi and other microorganisms from growing in your fuel tank and filters with BIOBOR JF."

Keep fuel flowing. Contact your distributor, or call your

Clas-Eirik Strand has been appointed president of Wartsila

He will manage all Wartsila Diesel activities in North America, Central

America, and the Caribbean Basin, from the new company headquar- ters in Chestertown, Md.

Mr. Strand has been with Wart- sila Diesel since 1975, and most recently served as vice president of

Wartsila Diesel in Finland. He con- tinues as head of their international management team responsible for diesel power plants worldwide.

Wartsila Diesel as vice president and chief financial officer. Mr. Eck- el has a background in investment banking and management consult- ing to the United States electric power industry. His experience in third-party financing, leasing, and merger and acquisition financing will be of great value in obtaining and structuring appropriate financ- ing for projects that include Wartsi- la Diesel engines.

Torsten J. Astrom has been appointed vice president-power sys- tems. He will be responsible for all land-based power systems and pow-

Central America, and the Caribbean

Mr. Astrom has held a variety of sales and marketing positions with- in Wartsila Diesel since joining the company in 1980.

Daniel Kabel has been ap- pointed vice president-diesel ser- vice. He will be responsible for product support and service for

North America, Central America, and the Caribbean Basin. The five regional service offices will report to

Mr. Kabel at the company's head- quarters in Chestertown.

Mr. Kabel, a graduate of the

U.S. Merchant Marine Academy, is a member of the Wartsila Diesel international management team re- sponsible for diesel service.

Yannes, who will also be located in

Chestertown, will be responsible for all Wartsila Diesel marine market- ing activities in North Amnerica,

Central America, and the Caribbean

Mr. Yannes, a 1977 graduate of the U.S. Merchant Marine Acade- my, has held a variety of marketing and sales positions at Wartsila Die- sel since joining the company in 1983.

A representative selection of

These instruments and controls are designed for the protection and automation of the engines, electric motors, pumps, and generators on vessels.

For more information and free copies of the marine equipment cat- alog from Murphy Mfg.,